On 24 February the second contempt case started at the STL, against Lebanese newspaper Akhbar Beirut and its editor-in-chief Ibrahim Al Amin. With the recent acquittal by the Appeals Panel of the accused in the first contempt case (see our previous blog), it will be very interesting to see whether the Prosecution has changed its case strategy. 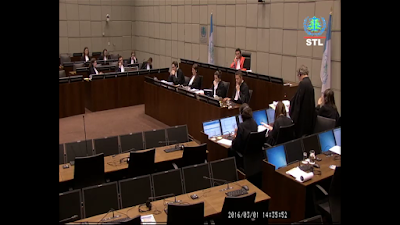 According to the Amicus Curiae Prosecutor Mr Kenneth Scott, Al-Akhbar newspaper and Mr Al Amin published on 15 January 2013 an article about Tribunal leaks, clearly identifying 17 alleged protected Prosecution witnesses in the Ayyash case, including full names and pictures. On 19 January the same accused published an article identifying another 15 alleged protected Prosecution witnesses. According to the Prosecutor, the accused were determined to obstruct justice and to interfere with the willingness of witnesses to testify. They knew exactly what they were doing. They republished the confidential information after they were ordered by the Tribunal to stop disseminating this information, and even after they were charged for contempt of court. According to the Prosecutor, Al-Akhbar published “what it deemed necessary to counter the international campaign of fabrication targeting the resistance”, that is Hezbollah. 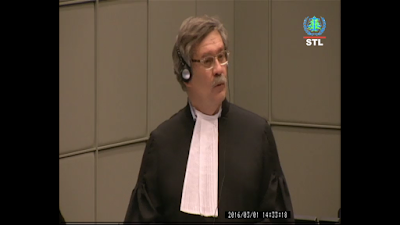 The Defence in its opening statement highlighted the importance of the media and freedom of press, also in criticizing the work of the Tribunal and monitoring judicial proceedings. According to Defence counsel Mr Abou Kasm, the press in Lebanon has a tradition of publishing names of so-called confidential witnesses, acting as a watchdog to monitor judicial activities of Lebanese courts to redress any undesirable situations. It is not the intention of the Lebanese press to harm other persons, but it “considers the publication of any information unknown to the public as a means to set things right, encourage reform, and promote the rule of law, justice, and equality.” Further, Defence counsel stressed the lack of any relation between Al-Akhbar and Hezbollah, as confirmed by the secretary-general of Hezbollah and the critical content of the articles published in Al-Akhbar. Due to the current prosecution of Al-Akhbar “some news outlets opted for keeping clear of the STL, not daring to make any criticism, and others no longer care about covering the Tribunal's activities including the newspaper I was assigned to defend”. Defence counsel stressed the high number of attacks against and murders of journalists in Lebanon. According to the Defence there is no proof of actual threatening of witnesses or a loss of confidence of witnesses or the public in the Tribunal. The Prosecution is making a mistake because “[i]nstead of prosecuting those who leaked and continue to leak information, he is prosecuting those who published some of this information for journalistic purposes.” Al-Akhbar only published a sample to warn the Tribunal, a “legitimate criticism in line with the policy of the newspaper and in line with its editorial line, which refuses to ignore and turn a blind eye to wrong-doing.” 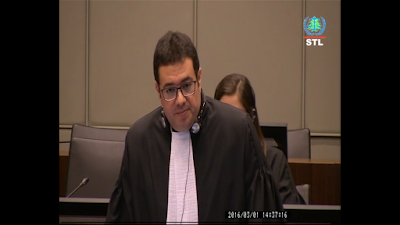 Prosecution's case
Also on 24 February, the evidence of the first Prosecution witness, AP14, was heard in closed session. Subsequently, Prosecution witness Mr John Comeau appeared before the court, with again most of his evidence being heard in private session. Mr Comeau worked for the Tribunal until December 2013 as the human source coordinator. Mr Comeau gave evidence about the two news articles in Al-Akhbar in January 2013, which according to him contain clearly identifiable purported Prosecution witnesses, including their full name, picture and other identifying information.

Further, on 25 February, witness Akram Rahal was called by the Prosecution. Mr Rahal worked for ISF (the Lebanese police) as an officer at the Central Criminal Investigation Sections until 2015. On 20 January 2013 Mr Rahal, together with his colleague, was tasked by the public prosecutor at the Lebanese Court of Cassation to serve a document from the Tribunal on Mr Al Amin and Mr Pierre Abi-Saab, the vice-editor of Al-Akhbar; this document was a decision of the President of the STL of 18 January 2013. The document was served on Mr Al Amin’s lawyer, Mr Saghieh, as they could not reach Mr Al Amin.

Subsequently, the evidence of witnesses AP07 (26 February), AP09 and AP06 (29 February) was heard in closed session. On 1 March witness Moukelad Al-Araki gave evidence about him being tasked by the Prosecution to monitor on a daily basis the availability of the Al-Akhbar articles on the internet. Mr Al-Araki started monitoring on 23 December 2015, and the articles remained available until this very date. The witness took daily screenshots of the online articles and sent them to the Prosecution. In February 2016 the witness noticed the blurring of the article of 15 January, and later also the blurring of the information and photos of the witnesses. Most of the cross-examination of this witness was in private session. This cross-examination apparently revealed that the witness had a contract with the Prosecution and was paid to perform his tasks. The Defence refused to continue its cross-examination because of this lack of transparency. Judge Lettieri suggested that the Defence could file a motion to exclude the evidence, but that nothing prevented it from continuing its cross-examination.

The last Prosecution witness to appear was Anne-Marie De Brouwer, who also testified in the first contempt case against Al Jadeed and Ms Al Khayat.. In that case, the Contempt Judge found that her evidence did not address the effects of disclosures in Lebanon or in the region, and therefore was of limited value. In the meantime she did look at some reports on Lebanon, but her views seem largely based on information and conclusions from Tribunal decisions to hold trials in absentia, quite a different topic and context.

Ms De Brouwer is an associate professor in (international) criminal law at Tilburg University and has been working in the field of victimology for more than 15 years. Ms De Brouwer has written a report addressing
(i) the effects of disclosure of identifying information of (alleged) witnesses/victims in an international case on on actual or potential witness, and the public, and the impact on the administration of justice;
(ii)  the consequences of publishing identifying information of (alleged) witnesses/victims for actual/potential witnesses in international cases, taking into consideration geographical, political, ethnic or religious circumstances in the country of origin, as well as the nature of the crime(s) concerned, and the nature of their involvement;
(iii) "[t]he impact disclosure by national and local media of identifying information about alleged victims and/or witnesses related to or involved with international criminal tribunals located outside their residing country can have on actual or potential victims/witnesses, their sense of security and protection and willingness to testify as well as on the administration of justice."

Ms De Brouwer testified that from the experience at the various tribunals in relation to protective measures, it can be concluded that if the security situation is very difficult or if the political tensions are grave, it is very difficult for victims to feel safe. It is very difficult to testify against your own or another group, because if your identity is known, you will have serious concerns about your safety. According to Ms De Brouwer this analysis can also be applied to Lebanon, a very small and populated country where the media is very intensive, and with its delicate and sensitive security situation. The witness further explains in general the impact of disclosure of identities on witnesses and she comments on media articles about the publication by Al-Akhbar of the list of witnesses, and their impact on (potential) witnesses and public opinion.

This witness concluded the Prosecution's case. It is impossible to assess the strength of the Prosecution's case without knowing the evidence of most of the witnesses heard in closed session. The Defence case, if any, is scheduled to start on 7 April.
Posted by Unknown at 1:24 PM No comments: