January & February at the STL: Prosecution investigator Macleod and a representative of Alfa

Alasdair Macleod (12-14 January 2016)
Mr Macleod is an investigator for the Prosecution, who has previously worked for UNIIIC, the ICTY and the British government. The witness is called to court at the request of the Defence to be examined about his investigative work, including interviewing witnesses and taking statements. More specifically, the witness is questioned about the statements he took in relation to Abu Adass (the person who made the false claim of responsibility), the delivery of the video with the claim of responsibility to Al-Jazeera, and the Al Qaeda 13 group. The witness was tasked with finding evidence on what happened with Abu Adass. The Defence for Mr Sabra asked the witness about these investigations, which again led to discussions about the relevance of the witness confirming the content of statements given by other persons (see also the cross-examination of Ms Kamei, discussed in our previous blog).

Further, most of the cross-examination of this witness remains unknown or impossible to follow, as a large part of his evidence is in closed session, and in open session the names of the persons about whom the witness was questioned, were not revealed to the public. The Defence for Mr Sabra asked the witness to comment on his investigation work in relation to certain persons and information that seem relevant for the Defence case, for example their alternative theories on Abu Adass’ role. The cross-examination of this witness is still to be continued. 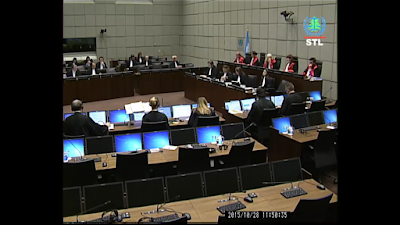 
Closed session
On 20-22 and 26-29 January the Court heard the evidence of a witness in closed session.

PRH707 (29 January, 9-12, 15-18 February 2016)
The evidence of PRH707 was heard in open session, although the witness’ identity was kept away from the public. PRH707 is an electrical engineer and has worked in telecommunication for about 25 years. The witness has worked at the Lebanese mobile network company Alfa since April 2012. He has been delegated as a representative witness of Alfa by the Minister of Telecommunications of Lebanon. Alfa is a company that manages the mobile phone network owned by the Lebanese state. At Alfa the witness deals with corporate reporting and the technical systems.

PRH707 gave evidence about three types of records generated by Alfa in the ordinary course of business: call data records, cell site-related data and the database holding customer information (the so-called "subscriber database"). The Prosecution relies on these records to link certain telephones to the accused. A discussion was held in court if part of the witness' written statement could be tendered into evidence - in addition to the evidence he will give in court - with the Defence objecting to this. The Chamber still has to decide on this matter, but the amount of discussion shows that this is an important witness to the parties, with the telecommunication evidence constituting the core of the Prosecution's case. The witness explained that in order to create his statement, he consulted people from other departments within his company. These requests included confirming certain business records and procedures.

The unit in charge of the subscriber database does not fall under the authority of the witness and therefore he cannot say anything about its accuracy. The witness explained that two years ago they set up a new system to ensure that the database of subscribers is more reliable than it used to be. Identification papers, a photograph and personal collection of the card are now required to obtain a SIM card. The information in the subscriber database is for example used by the Alfa call centre dealing with customer complaints. The witness explained the procedure at Alfa in relation to the sale, activation, payment and recharging of pre-paid and post-paid SIM cards.

The cell site-related data is used by the team that is dealing with the coverage of specific areas (the radio team). The witness gave evidence about how new stations or new sites can be built to extend or improve the coverage. Various values were manually measured after the installation of the station, including the value of the azimuth, or the direction of the antenna. Customer complaints or the construction of additional stations occasionally required the modification of these antennae. The recorded values for 2004 and 2005 cannot be double-checked by Alfa.

About the functioning of the Alfa network, PRH707 explained that in principle a mobile phone will connect with the best serving cell or signal, although a low percentage of handsets will connect to another signal, causing complaints about the quality of the sound. Normally the best serving cell would be the closest geographically, although for example buildings blocking the signal or the station's limited capacity will create exceptions. Alfa used a software program called Aircom Asset to create maps showing the strength of the signal and maps showing the best serving cell for a certain location, the so-called shape files. These shape files were created using different models predicting the coverage. PRH707 and his colleagues have prepared a diagram of the structure of the Alfa network in 2004-2005. The witness testified about the functioning of this network.

The witness further gave evidence about how the company dealt with the requests for data and records by the Tribunal. PRH707  commented on many of the documents provided by Alfa to the Tribunal, confirming their authenticity and explaining their content and origin. This includes documents about telephones that were part of the blue, green, yellow and red networks used by the accused according to the Prosecution.

The examination-in-chief by the Prosecution of this witness took more than two weeks (although there was quite some repetitive evidence). The cross-examination of PRH707 has been postponed, but, in view of the importance of this evidence, will be expected to take very long as well.
Posted by Unknown at 10:38 AM