On 4 April 2016 the Trial Chamber decided, after hearing from the parties (with only two Defence teams opposing) that because of the factual and technical complexity of the trial, periodic in-court thematic summaries of evidence will be held. This seems to be an advantage for the Prosecution, which has to present an active case and now has been given the opportunity to stress its interpretation of the evidence or add further detail and interpretation. Furthermore, one wonders whether it would have been preferable to have a lengthier indictment or Pre-Trial Brief or more detail in the bar table motions when requesting the admission of specific evidence instead of using additional court time, especially in light of the trial's length thus far.


The Prosecution provided an overview of the documentary and witness evidence in relation to the interconnected red, blue, green and yellow telephone networks. The Prosecution explained their theory as to which telephones from which networks belong to which accused, when the SIM cards were (de)activated, their user information, and their recharge information as well as handset acquisition and history. For example, all telephones from the yellow network were charged from sequential top-up cards, therefore showing their interconnection. Three phones operated as a closed circuit within the green network which, in total, consisted of 18 devices. These three phones operated from 13 October 2004 until 14 February 2005 (the day of Hariri's assassination) and belonged to the accused Merhi, Ayyash and Badreddine, according to the Prosecution's theory. Further, all eighteen phones of the green network were purchased with fraudulent IDs, activated as a group and deactivated because of lack of payment on 23 August 2005. The red network sim cards were all bought on 24 December, which is shown by the range of the bar codes. These were credited on one occasion only and the registered subscribers deny having bought these sim cards. 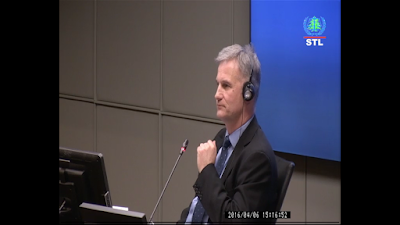 After this summary of the Prosecution's evidence on the telephone networks, Prosecution investigator Gary Platt was heard as a witness in court. He was tasked by the Prosecution with organising the telecommunication evidence and putting it into evidentiary format. The questioning on 4 and 5 April dealt with the question of whether he is qualified as an expert in the field of telecommunications evidence and surveillance. The Defence challenged his expert qualifications, taking the position that he's an investigator and not an expert, and not impartial and objective as he is a member of the Prosecution. The Trial Chamber however declared Mr Platt an expert in two areas: the surveillance of criminal networks and the identification and organisation of covert communications networks.

Mr Platt has been involved in telephone analysis during his work for the police in the United Kingdom. His work included monitoring individuals through cell site data for intelligence and police investigative purposes. He would use information coming from the telephone service providers. Mr Platt's police work involved dealing with the telephone evidence in the London transit bombings in 2005. He has been trained as a handset examiner and has experience in the field of (covert) surveillance. Mr Platt has given evidence in over forty criminal trials in the United Kingdom.

Mr Platt prepared five 'indictment reports' for the STL Prosecution. In these reports he used collected call data records, cell site evidence, subscriber details, customer notes, customer contracts, financial information (payment and top up records), and witness statements. Mr Platt also prepared a report on the functioning of the telephone networks in relation to the assassination of Hariri and a 'network analysis report', whose analysis is the topic of his current testimony in court.

The witness gave evidence on the level of covertness of the various phone networks allegedly used by the accused (red, green, yellow and blue). This covertness varies from no subscriber details to subscribers who knew nothing about the phone. He also explained the elements of organisation of the phone networks, including the financing, the setup and the cessation of the network, the areas in which the phones operated, and the level of call and SMS activity between the the network phones and with third parties, if any. The witness gave his thoughts about phone patterns typical for criminals, which according to him includes short duration of phone calls, switching off phones, and payment in cash. He also tried to explain why some of the phones of the green and blue network were used after the terrorist attack on 14 February 2005, including the possibility that these phones were used for another criminal purpose, and that they were considered to be covert enough to continue their usage. According to the witness, the patterns in usage, location, crediting, etc show the organisational structure of the four phone networks.

The evidence of this witness will be continued in the near future.
Posted by Unknown at 5:20 PM