From 23 to 25 March, Mr. Fouad Siniora, former Prime Minister of Lebanon, testified for the Prosecution at the Special Tribunal for Lebanon, starting with questions from counsel for the Prosecution, and on 27 and 28 May, he finalized his evidence. He was another former friend and ally of the assassinated Rafik Hariri, whose assassination is under investigation by this tribunal. From 1992 to 2004 he was a minister, after which he became Prime Minister from 2005 until 2009. 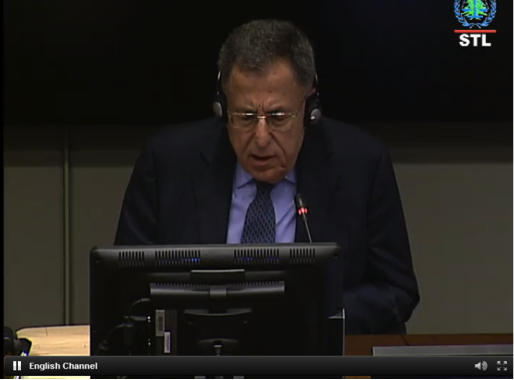 [Screenshot of Mr. Siniora in court.]

Not surprisingly, given the testimony of the previous Prosecution witnesses, Mr. Siniora was asked by the Prosecution to respond to questions with respect to his relationship to Syria and more specifically Bashar al Assad. He testified about the heavy involvement and interference by the Syrian regime in Lebanese politics and the security system.

Mr. Siniora described the visits abroad that Hariri would make, and how each of these would upset some of his political opponents, and every time Hariri used to say "God help us when we return to Beirut", pointing at the response of his opponents to his visits. In both Lebanon and Syria, Hariri's visits would be sabotaged. False accusations were uttered against Hariri, accusing him of treason in spite of the latter's attempts to move Lebanon forward.

At some point, Mr. Siniora and Mr. Hariri discussed Hezbollah's threats and assassination attempts against Hariri. Siniora was shocked to hear of this, and testified that "[t]his was extremely sudden and astonishing for me, and that was followed by silence and I never asked him another question about this". This would have been at the end of 2003 or beginning of 2004.

The last time Mr. Siniora visited Hariri was at the latter's residence, the Saturday two days prior to his assassination. He testified that Mr. Hariri looked sombre and angry, and looking very upset.

In response to a question by defence counsel whether he or Mr. Hariri could have entered government without Syria's consent, the witness makes the following statement:

"The Syrian presence contributed to achieving internal peace in Lebanon at the time, and therefore Prime Minister Hariri took office through a democratic -- a comprehensive democratic process at the time. The circumstances prevailing in Lebanon at the time imposed and made it necessary. [...] So this issue, no one can say, no one can undermine the support or underestimate the importance of the Syrian support at the time, but it was a support given to someone who had already been given full support by the Lebanese and by the elected Members of Parliament."

The subsequent day of his testimony, 25 March, Mr. Siniora testified about the judiciary of Lebanon, and how it was manipulated. He gives an example of a law that had been adopted by Parliament to strengthen the judiciary, and how that law had been rescinded some ten days later because of political interference by the Lebanese-Syrian security apparatus. Furthermore, he testifies that even though the law guarantees judicial independence, the reality is different. He also provides some examples of security services interference with politicians. Also, in 1998, legal proceedings were initiated against a number of individuals who were close to former Prime Minister Hariri.

On 27 and 28 May, the cross-examination by the defence continued. Counsel Korkmaz for Badreddine questioned the witness on the arrest of the four Lebanese generals after the assassination of Mr. Hariri. The witness maintained that "These were not political decisions being made against these people", and thus denied that there was a political motive behind the arrests and detention. Counsel indicated to the witness that two years after they had been arrested, there were signs that there was insufficient evidence to maintain the accusations against them, but they remained in prison for a further period of almost two years. The witness said that he was not aware of these warnings that occurred in 2007. At that time the witness was satisfied that the detention was legal and justified and not arbitrary. Until the order from the STL Pre-Trial Judge Fransen in 2009, the witness had never received an order to release the generals.

The following topic addressed by counsel Korkmaz was the political ties between Hezbollah and Hariri. The witness was personally opposed to an extension of Emile Lahoud's term as President. The witness states that everybody knew that Hezbollah supported the Syrian regime. They did not support Mr. Hariri's candidacy and they never gave a vote of confidence to the governments established by Hariri between 1992 and 1998. The witness further states that the relationship between Hariri and Lahoud was not a good one; Hezbollah was clearly loyal to and supporting Lahoud.

With respect to Resolution 1559, the witness shared Mr. Hariri's opinion: he was against Resolution 1559, but in agreement with the Taif Agreement. The Resolution put a responsibility on the Lebanese that they could not shoulder. After the year 2000, the role of Hezbollah in Lebanese society changed. Prior to that they were heading the Lebanese resistance in the country. From 2006 onwards, Hezbollah no longer spoke in the name of the Lebanese, and they were no longer pointing to the Israeli occupation of Lebanon. The witness also responded to questions about the relationship between Lebanon and the US, whilst denying that his government and the US were allies. The US is a major power, though, and it played a big role in Resolution 1701, which called for the withdrawal of Israeli forces from all the territories in Lebanon it occupied in 2006.

The last topic of interest discussed with this witness concerned the 26 August 2004 meeting Hariri had with Assad regarding the extension of Lahoud's mandate. The witness confirmed that Mr. Assad had told Mr. Hariri "I will break Lebanon over your head", as several other witnesses already testified.
Posted by Unknown at 4:28 PM