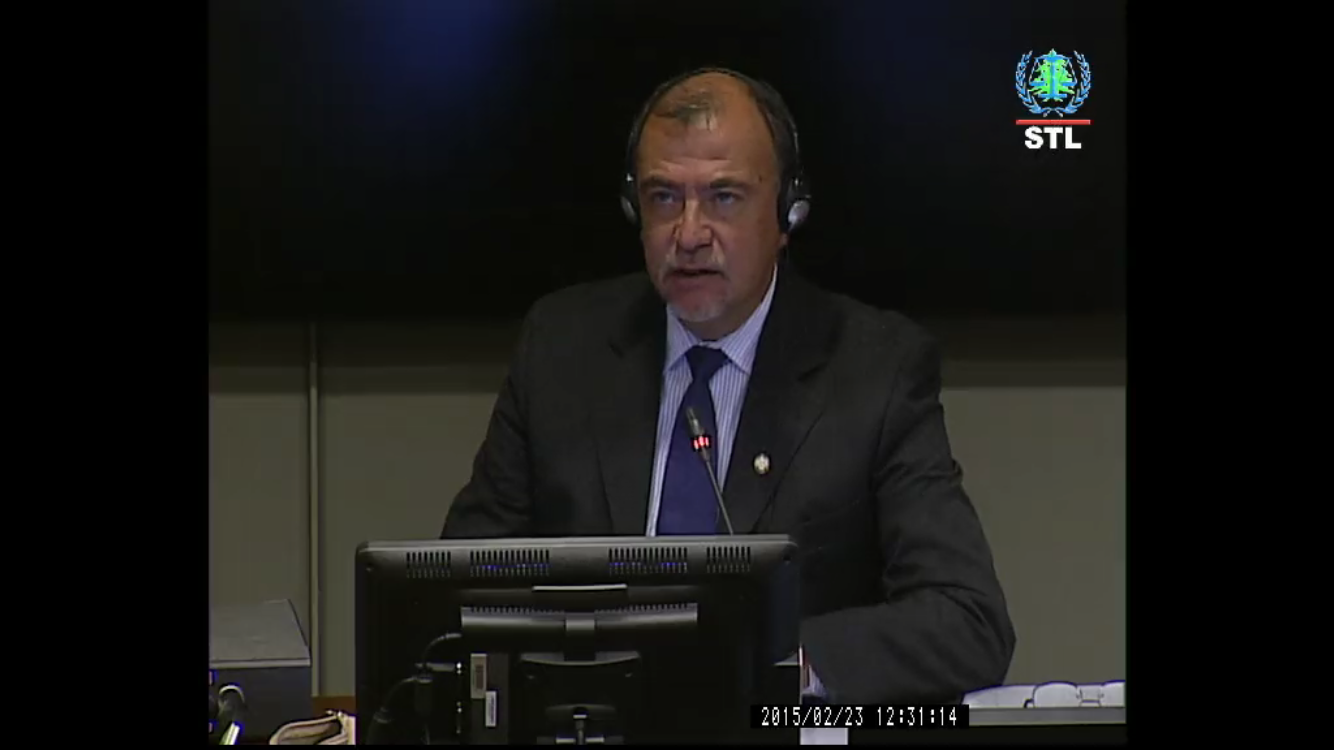 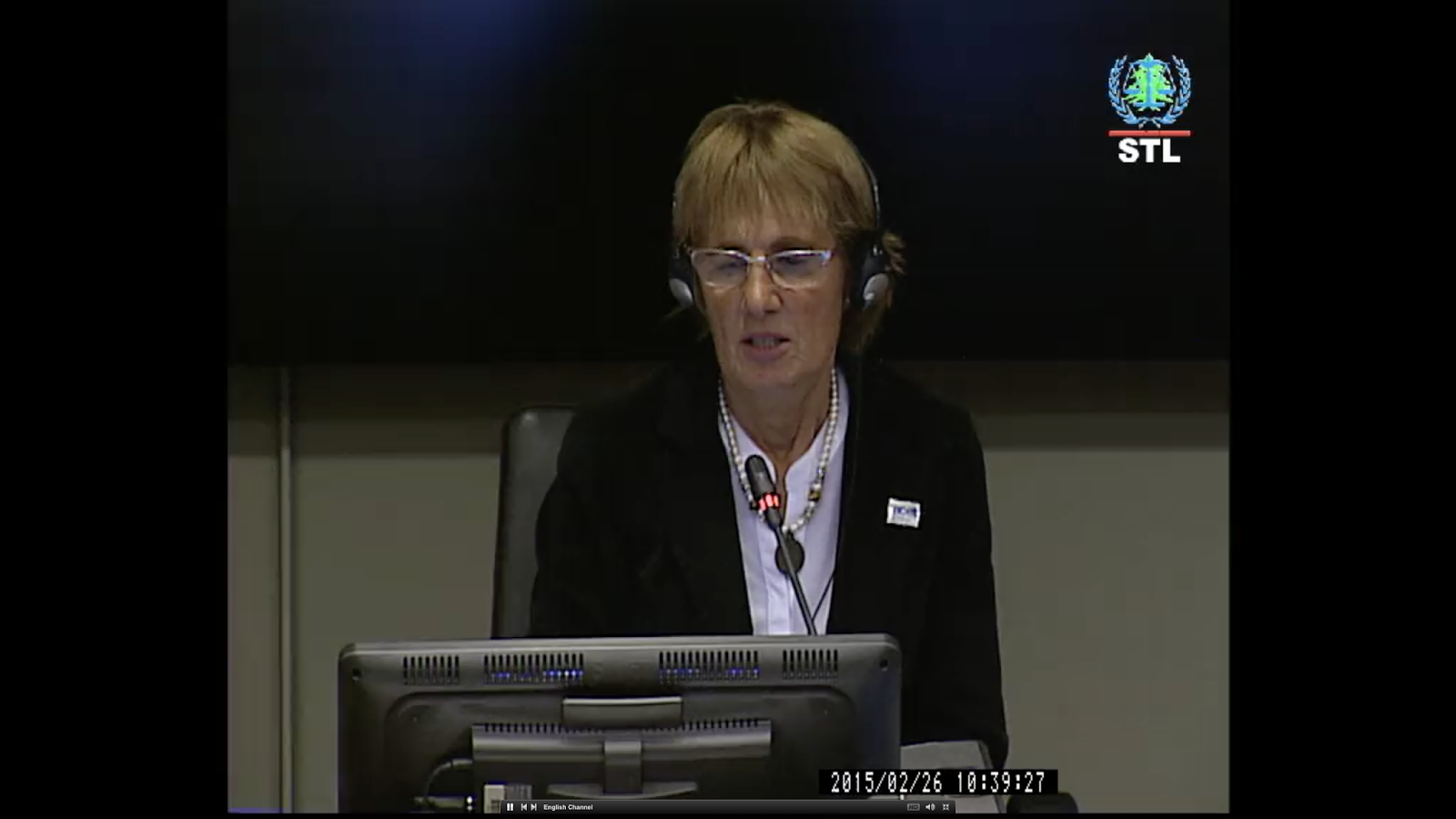 [Professor Ambrosini (top) and Professor Luccioni testifying before the Tribunal]

Jointly these two professors have submitted a number of reports to the Lebanon Tribunal providing studies of the explosion of 14 February 2005, with the main report entitled “Final Report on the Quantity of Explosives” and prepared in September 2010. This report deals with a numerical determination of the explosive mass based on an analysis of the crater and the damage to the surrounding buildings. These experts calculated with computer models - based on real-life experiments - the amount of explosives that could have created the crater and the damage to the surrounding buildings. The experts also looked into the location of the explosives in terms of height above the ground, and the shape of the explosives. Unfortunately, the expert reports of these two professors, though public in nature, are not (easily) accessible to the public, and without these reports the testimony of these experts was difficult to follow.

Together with other researchers, Professor Ambrosini and Professor Luccioni conducted a series of explosion experiments, which included experiments above the ground, on the ground and underground. This was done in the northern part of Argentina, at a flat location completely void of trees or vegetation; the differences in craters and the amount of soil expelled up above due to the explosions are shown on photographs. These tests were used as one of the sources for the calibrations of the numerical simulations done with computers. For example, the results of various explosion experiments done in France (one using a van elevated on bricks as a container for the explosives) were used as well. According to Professor Ambrosini, the three most important variables that determine the size of the crater are the quantity of explosives, the shape of the explosive, and the location of the explosive.

With a three-dimensional model to reflect the actual situation in Beirut before the blast occurred, Professor Ambrosini explains how the blast wave occurred, and at which buildings it was reflected, including the St. Georges and the Byblos buildings. Professor Ambrosini also explains that from the perspective of the perpetrator it would be the most effective to locate the detonation point on the opposite side of the target’s location. However, the analysis does not permit one to identify the detonation point within the explosive mass. Professor Ambrosini also participated in a real-time, real-life explosion experiment in 2010 in France at the suggestion of the Prosecutor of the Lebanon Tribunal. In this experiment a canter van was used with 2.467 kg TNT equivalent explosives in rectangular form in the back of the van; attempts were made to reproduce as closely as possible the circumstances of the road and surrounding vehicles. A series of pressure sensors were put in positions around the vehicle to locate and identify blast overpressures. The results of this experiment came back as very close to the numerical model designed beforehand.

Professor Luccioni explains the different types of analyses used to analyse the damage to the buildings: a surrounding urban ambient scale analysis (to provide the bigger picture), a building scale damage analysis and a structure scale analysis. Professor Luccioni gives quite some detail about these complex technical analyses, which provide information about for example the blast wave and the overpressure values, and thus about the quantity and shape of the explosives used. One of the main conclusions of the overall analysis is that a "distributed explosive load with a TNT equivalence of between 2.500 to 3.000 kilogrammes, located above ground, at a height between 50 and 80 centimetres from the pavement surface, is compatible with the observed crater and structural damage."

During cross-examination the following topics, among others, are explored by defence counsel: the initial contacts between the Prosecutor and the experts, the review of their scientific work by peers, the uncertainties in the measurement of the diameter of the crater, the alterations that took place after the explosion, and the possibility of an underground explosion. When reviewing the initial information about the explosion, Professor Ambrosini had also thought that the explosion had been underground, but after carrying out the study, they were able to demonstrate that it was in fact not. Professor Luccioni also excludes the possibility of an underground explosion during her testimony. About the way the explosion has been carried out - through a car, a bomb, a missile or otherwise - Professor Ambrosini remarks that “in no moment in time in our report did we say that it was a car bomb or a truck” and “a concentrated load such as a bomb could have generated this crater, created this crater, but it would have caused other types of damage as well.”
Posted by Unknown at 10:16 AM