Closing arguments in the contempt case 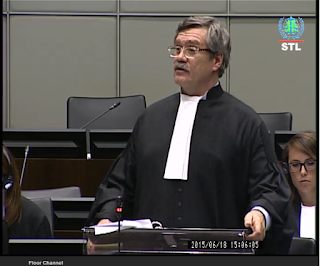 
Amicus Prosecutor Kenneth Scott argued that Ms Khayat and Al Jadeed endangered (potential) witnesses by disclosing information about persons alleged to be protected witnesses. Witnesses and potential witnesses will lose their confidence in the proceedings. He argued that the need to discourage this type of behaviour is a matter of great public interest. He argued that the case at hand constitutes behaviour falling within the scope of Rule 60 which prohibits "interference with the administration of justice". He argued that there need to be no actual interference where the conduct undermines the court's legitimacy, but a real risk that the conduct will result in that. He requested a 6 million euro fine for Al Jadeed and for Al Khayat two years' imprisonment and a 200,000 euro fine.

The Amicus Prosecutor argued that Al Jadeed did not have to identify the persons in question, they could have provided the same information that they deemed relevant without divulging their identities and without putting them at risk.

Defence closing arguments
The defence for Al Khayat and Al Jadeed presented its closing arguments. According to counsel for the defence, Karim Khan, QC, Mr. Scott mischaracterised the evidence. Whilst the Prosecutor had referred to people and witnesses at risk, that was not the charge in the indictment. The indictment states that the confidence in the tribunal was undermined. He further criticises the Prosecutor's closing brief where the Prosecutor shifted the burden of proof on the defence in arguing that there was no evidence that the email that was purportedly sent was not received by Al Khayat. 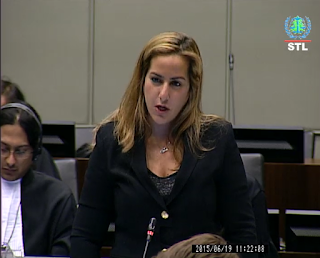 
Khan stated moreover that the journalists identified themselves in the broadcasts; they made jokes with the persons they were interviewing. They did not intimidate in any way. Further, Khan argues that there is no actus reus (the objective element of a crime), there is no confidence undermined, which is essential to proving interference within Rule 60 of the Rules. He stresses that Rule 60bis specifies that only conduct that undermines the proper administration of justice, and does not state may undermine or the risk of undermining. There is no mens rea (the mental element the commission of a crime) either, according to counsel for the defence, Al Khayat cooperated, and always operated to the best standards and best practice of journalists. Further, where the Amicus stated that identities were divulged, counsel for the defendants states that the faces were pixelated, their faces were not shown, their names were not provided. This provides evidence that Al Jadeed did not have criminal intent. Khan addresses Judge Lettieri when he states: "In order to convict Al Jadeed and Ms. Karma Khayat, you must be satisfied beyond reasonable doubt that the only plausible explanation for the broadcast was a criminal intent to undermine confidence in the Tribunal. If there is any other plausible option, an acquittal must result. And we say the Prosecutor has not discharged that burden of proof".

The contested email of 11 August 2012 from Mr Lodge from the STL sent to Ms Khayat is addressed by the Amicus Prosecutor in his rebuttal. This email contained the order of the Trial Chamber of 10 August 2012, directing Al Jadeed to stop the broadcast series containing the contested information. Ms Khayat claimed she never received the email, though the Amicus Prosecutor states he does not believe this, as it was sent to Ms Khayat's regular email address that she had used before and after. Mr Khan in his rebuttal stressed that Mr Lodge himself had testified that he had no idea whether the email had been received by Ms Khayat.

Mr Khan further stresses that the rights of the accused are similar in this case to any other criminal case, and that the court should not convict unless convinced beyond reasonable doubt that they have committed the crimes they are charged with. In his opinion, this threshold has not been met in the instant case.

Rodney Dixon, second counsel for the accused, set out arguments in relation to corporate liability. Stressing that this is the first case ever that a corporation is being tried for contempt of court in international criminal law, it is essential that it has to be right. Of course, Judge Lettieri had been against prosecuting the corporations (see our earlier blogs: here and here), but the Appeals Chamber had ruled against him. Whilst there is thus no use for the defence to revisit that argument, Dixon set out that the Amicus Prosecutor had failed to establish the elements of the offenses. Since there is no international case law on this matter, national jurisdictions have to be consulted, and the Amicus Prosecutor has failed to do so properly.

In her final speech to the court, Ms Khayat stressed that "We will not be silent. We will not step back. We will not be afraid of you. We will never, never stop. You will never be above the rights of the Lebanese people", indicating that in her opinion this whole case is more about press freedom, and not about contempt of court, thus dismissing the Prosecution's argument that Al Jadeed put witnesses at real risk, and that they obstructed justice willfully and intentionally.

The Judge indicated that a written judgment will be produced in approximately two months' time.
Posted by Unknown at 9:32 AM