Al-Jazeera witnesses on the claim of responsibility for the bombing


“ONEISSI and SABRA [..] acted together in disseminating statements falsely attributing responsibility for the attack, ensuring the delivery of the video and ensuring that the video would be broadcast. Starting about 75 minutes after the attack, ONEISSI or SABRA made a total of four calls to the offices of the Reuters and AI-Jazeera news networks in Beirut. All four phone calls were made using the same prepaid Telecard 6162569 from four different public payphones. The sequence of events was as follows:


The Al-Jazeera witnesses are: PRH006 ‘the editor’, PRH007 ‘the film director’, PRH115 ‘the technician’, Ghassan Ben-Jeddo (his testimony will be discussed in a separate blog) and PRH430 ‘the producer’.

Witness PRH006: The editor (23-24 June)
This witness used to work as a footage editor in one of Al Jazeera’s offices in Beirut. She gave evidence about the two phone calls that she received at their office following the 14 February 2005 bombing that killed Hariri. These calls were made to a general publicly known telephone line which the public may use to ring into Al-Jazeera; the witness recalls being the person who first picked up the phone on two of those occasions. During the first call a tense male voice asked her to write down a statement he was dictating quickly, and as she was not able to follow up with what he was saying, he threatened to hang up. She gave the phone to her colleague Ghassan Ben-Jeddo, who also started to take notes. The man spoke Arabic, and was trying to speak with a Lebanese accent, but it was very clear that he was not Lebanese. The message on the phone was the same as the message sent to them in written form. The caller said, among others, that they had killed Hariri.

The same person called again, and the witness answered the phone but he asked her to pass the phone to someone who would understand what he was saying and she gave the phone to Mr Ben-Jeddo. Mr Ben-Jeddo told the witness that there was a tape left for them in a well-known tree in Beirut. The film director went there and came back without finding the tape. Mr Ben-Jeddo subsequently asked the technician to go and bring the tape. He had to climb in the tree in order to get the box. The technician brought the tape with him in an envelope; there was also a statement. As soon as he arrived the witness took the tape and they watched it immediately. They contacted the headquarters for Al-Jazeera in Doha - who would make the decision if something should be broadcasted or not - and the content of the tape was transmitted to them. The witness started working on the footage and images, but she heard from her colleagues that further calls were received concerning the claim of responsibility.

The Prosecution showed the witness a document with text messages sent and received by the witness, and asks her about her phone contacts with various colleagues from Al-Jazeera after the bombing. There is also extensive questioning about the exact timing of the events, about which the witness has provided some contradictory statements, and which is possibly contradicting the evidence to be given by other Prosecution witnesses who will testify about the same events. Obviously this is also relevant evidence in relation to the claims made by the Prosecution in the indictment about the exact timing of hte calls made by the accused (see above).

Witness PRH007: The film director (24 June)
In 2005, the witness, a film director, worked for Al-Jazeera Television in Beirut. The Prosecution provides a summary of the witness’ statement that is tendered into evidence:

Witness PRH115: The technician (7- 8 July)
The Prosecution again provides a summary of the witness’ statements that are tendered into evidence. In February 2005, the witness was working as a technician at Al-Jazeera. When the explosion took place on 14 February 2005, the witness received a text message from the editor which said that there had been a big explosion. He called her on the office land-line and she explained that there had been an explosion near the office. After this, the witness went into his home and watched the TV where he saw Mr Ben-Jeddo say that Hariri was the possible target. The witness went to the office, and was told that they had received a phone call from someone saying that there was a videotape to be collected and that the film director had gone to collect it but he was not able to find it. The witness went to the location at the Riad Al-Solh Square and there was only one noticeable tree next to the building, he walked around the tree two or three times. When the witness noticed a white box, he had started to worry as there were numerous soldiers in the area. He did not dare to bring the whole box with him, so he left it at the bottom of the tree and he took only the envelope with him back to Al-Jazeera. He gave the envelope with the tape to Mr Ben-Jeddo. After viewing the tape, Mr Ben-Jeddo and the editor told the others present in the office of its content. At this point, Al-Jazeera started broadcasting the news of the tape's existence. The witness also learned that there was a letter accompanying the tape which contained the same message as the video.The tape remained at Al-Jazeera for a couple of days before the security services picked it up. To the knowledge of the witness, there were three calls made to Al-Jazeera regarding the video and the claim of responsibility: the first call was to claim responsibility and to name the group, the second call was about the tape and its location, and the third call was to threaten to hand the tape to another network unless it was broadcast. 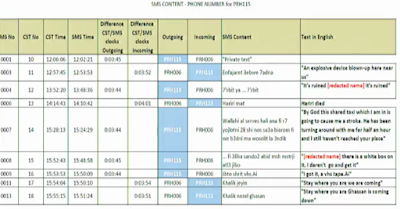 The Defence is questioning the witness about a number of phone calls he made in the weeks before and after the bombing that killed Hariri, as they believe some of the individuals he contacted might have been implicated in the operation to kill Hariri or in the operation to hide the responsibility of those who carried out the attack.

This witness doesn't remember much detail of what happened on 14 February 2015 and had to be taken to his previous statements to recollect the events. More than 10 years have passed since the assassination of Hariri, and this witness, like many other witnesses before this court, had memory difficulties. As the witness explained ‘Today I do not remember. Now the statement is in front of me, I've signed this statement, thus what I said at the time was true.’ This is an additional challenge for the Prosecution and especially the Defence in deducing evidence from witnesses and confronting witnesses with inconsistencies in their evidence.

Witness PRH430: The producer (13 July)
In early 2005 the witness worked in television production for Al-Jazeera in Beirut. After the attack, the witness went to the scene of the blast to direct the cameraman (in the absence of the correspondent) and to point him at what he should be filming; he also went to arrange live coverage from the crime scene with the headquarters in Doha. The witness took the footage back, and once the footage had been transmitted to Doha, he returned to the office. At the office the witness answered the landline, with a man speaking Arabic (an Arabic closer to classical Arabic, not spoken by Lebanese) asking to speak to Ghassan Ben-Jeddo, and the witness immediately handed over the phone to Mr Ben-Jeddo. That was the only call that he answered, and as far as he was aware the tape was at the office and the caller was inquiring why it had not yet been broadcasted. The witness further clarified that this was the third call; according to the Prosecution's theory the witness therefore spoke to either the accused Sabra or the accused Oneissi.
Posted by Unknown at 5:37 PM