Mr Ghassan Ben-Jeddo (testimony of 8-10 July) was the chief of the Al-Jazeera bureau in Beirut in 2005. The bureau chief was the main liaison point between the headquarters in Doha and the bureau in Beirut. He also was in charge of communicating and liaising with the local authorities and coordinating the work between the correspondents and the employees and staff members in the bureau. 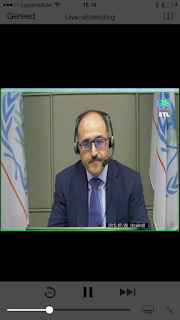 When the explosion occurred Mr Ben-Jeddo was at the office with the editor and the producer. They heard the explosion very clear. He left the office right away with the film director - because next to the Al-Jazeera office was the residence of deputy Walid Jumblatt - but they saw no trace of the explosion in the vicinity. The smoke was coming from the seaside, so they walked back to the main office in the central part of Beirut. The witness sent the producer and a correspondent to the area and went back to the office. The editor (witness PRH006) answered the first call, with Mr Ben-Jeddo taking over from her. The call came shortly after Al Mustaqbal announced that Hariri had been assassinated. The witness wrote down what the caller was saying, and he thinks this claim of responsibility was very similar to the text that they received on paper later on. An organisation called ''El-Nusra-wal-Jihad in Greater Syria'' claimed responsibility; the witness had never heard of this organisation and has no evidence of its existence.

This first call was not very clear. The classical Arabic of the caller was poor, and the pronunciation revealed that he was not an Arabic speaker. About the accent of the caller the witness further states:

"Either he was really from the area of Afghanistan, Pakistan, or he could have been from a place where his mother tongue was English but he spoke Arabic as well. It could be something like that. And there was a big difference between the first caller and the other callers. And as I said, it was obvious that he was reading a text or at least this was my impression and his language was not really good."

Following that first call the witness went on air on Al-Jazeera and provided information about the claim of responsibility they had received. The witness did not take the claim of responsibility seriously. "[I]n such a major assassination operation against somebody, when somebody gets in touch with you and speaks bad Arabic and tells you that they claim responsibility for Hariri's assassination and they're speaking a rather fundamentalist language, can I, as an experienced, seasoned journalist, can I conclude from that that this is confirmed a hundred per cent and that I announce it immediately in this way? I don't think this is ethical" Mr Ben-Jeddo said. When they received the tape afterwards, they took it seriously.

After the end of the broadcast Al-Jazeera received a second phone call; the caller was asking them to go to the tree next to the pink building close to the ESCWA building, and retrieve the tape within 15 minutes. This second caller was speaking proper Arabic. His voice was sharp; the witness couldn’t detect an accent, the man could have been Lebanese or from the region, he spoke neither colloquial nor classic Arabic but neutral. It was obvious that the caller was in a public area, there was a little bit of background noise. The technician (witness PRH115) brought the tape to the office. The tape was in an envelope and contained a written statement similar to taped statement . The witness thinks that, as a journalist and bureau chief, his role was to check the authenticity of the tape and then to feed the tape to the headquarters to take the relevant decision. That evening General Jamil El-Sayyed called about the tape and the next day the tape was handed over to him

The video tape with the alleged false claim of responsibility is played in court, and the accompanying letter is read out, containing the following words:

"Here is good news for all Muslims (…) Praise be to God, the banner of support and jihad was held aloft in Greater Syria and, praise be to God, due punishment was meted out to the agent of infidelity in the Land of the Two Holy Places, Rafic Hariri, through a suicide operation carried out by the Mujahid, Ahmad Abu-Adass, who raised the banner of support and jihad in Greater Syria on Monday 14 February 2005 AD, 5 Muharram 1426 AH in Beirut."

The letter further states that it attaches a film of the martyr Ahmad Abu Adass who carried out the operation, and is signed by Abou Hafass El-Chami. The letter and envelope were submitted for finger-print analysis to a national security agency; there were some latent finger-print marks but these did not match the finger-prints of the accused Oneissi, Sabra and Ayyash, whose finger-prints were taken from their passport applications.

After a while the witness received a third call from another person, a third person, who was asking  him why they didn't broadcast the tape. The witness told him that this was a decision that would be taken by the headquarters in Doha. The caller then became rather sharp, and he was threatening Mr Ben-Jeddo. The accent of the third caller was similar to that of the second caller, he had a local accent or from the region. The line was good and there was no background noise during this third call. In the end the headquarters decided to broadcast the tape. The witness is questioned about the exact timing of the various phone calls. Subsequently he’s being shown a list with phone calls received by the Al-Jazeera landline that was used to make the claim of responsibility, although the Prosecution is not taking the position that this list is complete. Some of the phone calls are made from public phone boots.

In cross-examination the Defence further questions the witness about the exact timing of the various phone calls, as his testimony deviates from his previous statements as to when the phone calls took place. Obviously this is important for the Defence, with these phone calls being attributed to two of the accused (Mr Oneissi and Mr Sabra). Also, the witness has previously stated that four telephone calls were received in relation to the false claim of responsibility, which seems inconsistent with the Prosecution’s case.

In addition, the Defence questions the witness about a person called Wissam, who worked from December 2004 for a period of three months for Al-Jazeera to assist in setting up the office. Wissam had been recommended by Ibrahim El-Masri from the Islamist movement Jamaa Islamiya. Defence counsel Mr Mettraux shows the witness records of telephone contacts between Wissam and Rustom Ghazaleh, the Syrian official in Lebanon, and between Rustom Ghazaleh and Ibrahim El-Masri. Phone records also show that Wissam had sent Eid greetings to Khodr Nabah, a friend of Abu Adass and one of the people from a Sunni fundamentalist group called Al-Qaeda 13 who was arrested in the aftermath of the Hariri killing. Under pressure, one of the members of the group confessed to being involved with the assassination, but subsequently retracted that confession. Information accusing Al-Qaeda 13 had come from Al-Ahbash, a pro-Syrian organisation. The witness thinks it might be possible that Wissam was at the office at the day of the bombing and assisted with contacting persons for the talk shows, as this would have been normal.

Further, the Defence asks the witness about his appointment with General Jamil Sayyed the day after the bombing. General Jamil Sayyed told the witness that initial investigations about Ahmad Abu Adass showed that the latter was growing more and more fundamentalist and religious, that he used to live in Tariq-El-Jdideh (where the Islamist movement Jamaa Islamiya was present), and that he was seen in one of the mosques. According to the witness, Jamaa Islamiya is a moderate religious organisation. The witness also explains that there was a great deal of doubt that a religious group had killed Hariri. Mr Ibrahim El-Masri had described Ahmad Abu Adass “as being a very modest, common person, and somehow naive. And he ruled out the fact that Ahmad Abu Adass had all these capacities and skills and resources to be part of such a massive operation. That's why he considered that Ahmad Abu Adass might have been a guinea pig or a scapegoat.”
Posted by Unknown at 3:04 PM