Judge Lettieri initially allowed Mr. Al-Amin to make a statement to the Court. Unsurprisingly, given the above-quoted tweet, Al-Amin decided to make a political statement, indicating his distrust of the international community, the United Nations Security Council, and more in particular the Tribunal itself. Judge Lettieri stopped Mr. Al-Amin indicating that the latter could challenge the jurisdiction of this Court, but that this was not the occasion to do so, after which the defendant, some thirty minutes into the hearing, decided to walk out of the courtroom (that he attended by video link) "because the court will not grant [him his] basic rights".  The accused hoped or expected to be granted the right to give a political statement at his Initial Hearing, though there is no "basic right" to do so. The Contempt Judge was right in indicating to the accused that he has an inherent right to challenge the jurisdiction of the Tribunal, but not at this instance.

The Judge adjourned the proceedings for some ten minutes, which time he obviously used to make up his mind about how to proceed with a self-representing defendant relying on the right to remain silent and walking out of the proceedings. 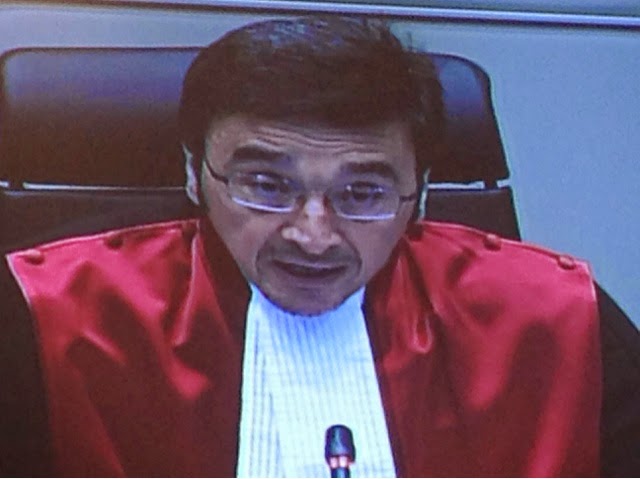 Upon his return, Judge Lettieri said that the Prosecutor must prove his case as he interpreted the defendant's behavior as a not-guilty plea. The Judge asked the parties' opinion on whether or not to impose counsel on the defendant. The Amicus Curiae Prosecutor argued that indeed, the defendant cannot represent himself if he chooses not to appear. The Head of the Defence Office Francois Roux argued, not very convincingly, that the right to self-representation is an absolute right. Roux suggested that a legal assistant or standby counsel be appointed to assist Al-Amin and Al-Akhbar in their defence, rather than represent them. He made reference to the case of Milosevic at the ICTY, where the latter was indeed allowed to represent himself. Judge Lettieri simply replied that the two cases are not comparable, given that Milosevic appeared in court. Roux attempted, in vain, to make a comparison to the practice at the Paris Bar, but Judge Lettieri simply responded that "We're not in Paris, and if we were you would not be here".

Judge Lettieri then requested the Head of the Defence Office to impose counsel on Al-Amin and Al-Akhbar pursuant to Rule 59f of the Rules of Procedure and Evidence, indicating that written reasons for his decision will follow soon, adjourning today's hearing.