Syria in the dock: Witness Hamade testifies at the STL

The week of 17 November started with the second part of the Prosecution's case at the Lebanon Tribunal. This phase will consist of some twelve parts, starting with several witnesses providing background evidence of certain political events prior to the 14 February 2005 assassination. Mr. Marwan Hamade is the first Prosecution witness to testify in this second phase, and he spent eight days in the courtroom providing testimony to the Court.

Defence attempts to block Mr. Hamade's testimony
During legal arguments preceding the testimony of Mr. Hamade, the Prosecution asked the Trial Chamber to allow it to present evidence against the Syrian regime and its President Bashar Assad in its case. The Chamber indeed allowed the Prosecution to go forward and the first political witness the Prosecution called to the stand was Mr. Hamade. 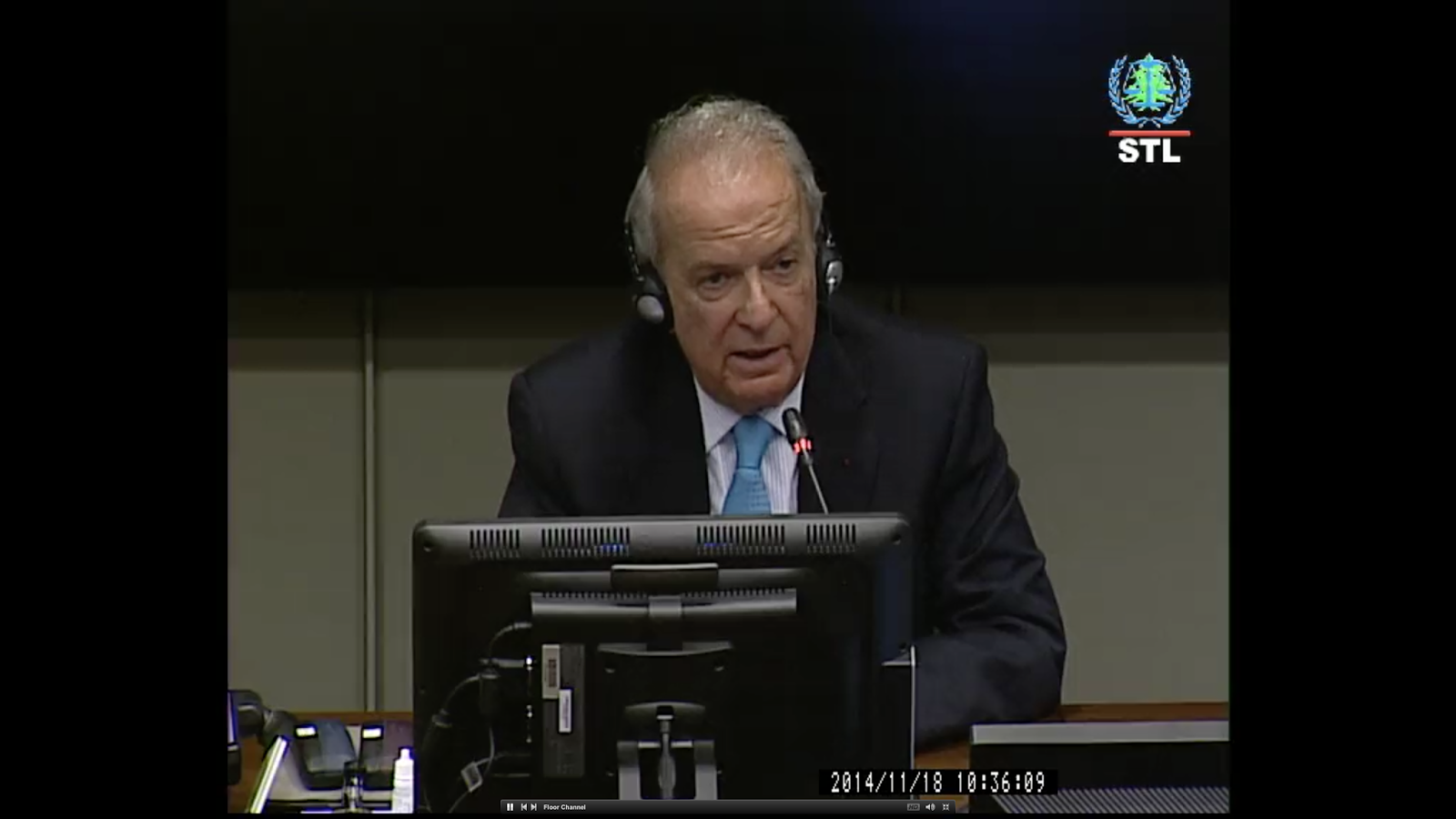 [Screenshot of Mr. Hamade testifying before the STL.]

Mr. Hamade was a close political associate of Mr. Hariri and a Lebanese cabinet minister who was intimately involved in many of the events at the time and was himself victim of an assassination attempt in Lebanon in October 2004, a case that might also be subject to further investigations by this Tribunal. He is currently a Member of Parliament and deputy for the Chouf District. On 13 November, the Prosecution outlined that Mr. Hamade's testimony (and the testimony of twelve further Prosecution witnesses) would highlight five themes: (1) Mr. Hariri's deteriorating relationship with Syria as a consequence of his goal to strengthen Lebanese autonomy; (2) Syria's corresponding increasing resolve to exert control over Lebanese internal affairs; (3) growing concerns voiced by the international community regarding external pressures bearing upon the political affairs of Lebanon; (4) the evolution of an effective opposition movement since September 2004 of which Mr. Hariri was first a silent and then a more public participant; and (5) Mr. Hariri's status as an influential statesman in the Gulf region and beyond.

With Mr. Hamade's testimony, the Prosecution hopes to bring to light the political tensions prevailing at the time preceding Mr. Hariri's assassination, and though it fails to specify a motive in the indictment against the five accused, arguing that the accused's personal motives are either non-existent or irrelevant, it hopes to bring to light the political motives for the assassination by providing these witnesses' testimonies to the court. Defence counsel vehemently objected to the hearing of Mr. Hamade's testimony in regard of his meetings with Syrian President Assad and Mr. Hariri as well as General Rustom Ghazaleh, the Syrian chief of intelligence in Lebanon at the time. The basis for their objection was that aspect of his proposed testimony was irrelevant and not pleaded in the indictment or the Prosecution's opening statements. However, the Trial Chamber ruled that the STL has an inclusionary approach towards receiving evidence, and that it may admit any relevant evidence. It regards evidence of the prevailing political situation in Lebanon in 2004 and early 2005 as potentially relevant and thus allows the Prosecution to call Mr. Hamade as a witness.

Testimony-in-chief of Mr. Hamade
The witness began his political career in 1977 and was almost continuously a Member of Parliament until 1990 and also held significant ministerial positions. He testified about the process of limiting Syria's role in Lebanon, starting with the Taif Agreement in 1989 between Lebanon, Syria and Saoudi Arabia that envisioned national reconciliation between Syria and Lebanon. In describing the years following this Taif Agreement and subsequent agreements between the two countries, the witness describes the relationship between Lebanon and Syria as follows:

The agreements, instead of as depicted by its texts leading to close cooperation, led to influence, intervention and hegemony by the Syrian state. He explained that the agreements were accepted by him and Mr. Hariri

The witness further noted that when the father of the current Syrian President, Hafez Assad, passed away, there were many promises and hopes that Syria would become more open, though in fact, the opposite happened. Syria's grip on Lebanon became tighter, and President Hariri was restricted in the formation of his first and second governments in 2000 and 2003 respectively. Hamade stated that "we were facing a group that wanted to influence more and more the Lebanese institutions, political, security, economic and financial institutions". The witness depicted Mr. Hariri as a man of compromise, someone who would always continue to talk to the enemy. But by April 2003, Mr. Hariri was completely paralysed, and Syria wanted to pave the way for the re-election of Emile Lahoud as president, though they pretended that Lebanon would be free to choose its president.

From the year 2000 onwards, freedom in Lebanon was more and more reduced because of Syrian tutelage.  The witness also extensively spoke about the period from 2003 onwards, when Mr. Hariri returned from a visit to Damascus; "he was humiliated by the president of Syria to prove that the people in charge in Lebanon were considered as no one, nothing, to the Syrians and no one should mistake the orders of Damascus". Mr. Hariri was forced by Al-Assad to cooperate with General Emile Lahoud, the Lebanese President who was acted in the name of the Syrian regime. However, Mr. Hariri did not accept full hegemony by Syria and their intelligence on Lebanese politics. In 2003/2004, the witness describes that Mr. Hariri and Mr. Lahoud's relationship had severely deteriorated. He also indicated that Syria was wire-tapping the telephones of Mr. Hariri and Mr. Walid Jumblatt, leader of the Progressive Socialist Party in Lebanon.

Mr. Hamade stated in this regard that Syria pressured Lebanon to transform its democratic parliamentary system to a presidential system where President Emile Lahoud was to grab all power and all other political actors would be subsidiary to his power. Instead, Mr. Hariri was attempting to form a government of national unity, a neutral government consisting of moderate ministers.

Under pressure from Syria, Prime Minister Hariri resigned from his post on 20 October 2004. After his resignation, the campaign against him aggravated, very openly. The international community had made a resolution that demanded the withdrawal of all non-Lebanese forces from Lebanon, and the pro-Syrian forces accused Mr. Hariri of having encouraged this; however, witness Hamade testifies that Mr. Hariri had not been involved in this. Mr. Hariri had been confident about winning the next elections in Lebanon in the Spring of 2005, in spite of all actions taken by Syria. Though information about Mr. Hariri's safety being threatened became more intense, according to witness Hamade, he was never sufficiently concerned about his own safety.

Cross-examination of Mr. Hamade
In cross-examination, Mr. Hamade testified to the cooperation between the late Mr. Hariri and Hassan Nasrallah, Secretary-General of Hezbollah, and their creation of an alliance for the legislative elections of 2005. Badreddine's lawyer Antoine Korkmaz suggested that there was a broad alliance between Mr. Hariri and Hezbollah, thus undermining the Prosecution's theory that the relationship between these two had severely deteriorated in the period leading up to the assassination on 14 February 2005. After the assassination, Mr. Hamade secretly met with Hezbollah leader Nasrallah, and he asked the latter about Hezbollah's involvement in the attack on his own life at the end of 2004. He denied Hezbollah had anything to do with that, but when he asked "Did the Syrian brothers have a role?", Nasrallah responded by saying that he did not know.

In cross-examination, counsel for Badreddine Mr. Korkmaz attempted to discredit this witness by saying he was biased against the accused persons, basing his questioning on previous interviews given by Mr. Hamade to the Lebanese press. The accusation that he lacked neutrality did not affect Mr. Hamade very much, who simply responded by saying that he is a political figure and that his statements should be understood in that light.
Posted by Unknown at 3:47 PM