Contempt case at the Lebanon Tribunal: The Prosecution case

On 16 April, the Prosecution started the presentation of its evidence in the first contempt case against Al Jadeed S.A.L. and Ms Karma Al Khayat (see our blog post on the Prosecution and Defence opening statements that day). That same day, the Prosecution called its first witness, Mr. Comeau.

Mr. John Comeau is a former STL staff member who was tasked with having direct contact with Prosecution witnesses about, among others, security concerns. He was the person that contacted the witnesses after the Prosecution became aware of the broadcasts by Al Jadeed. Only shortly after Mr Comeau's testimony started however, the court went into private session. Although this still remains to be seen, it seems likely that a large part of the evidence in the contempt case will not be available to the public. Some of the main evidentiary questions may therefore remain unanswered for the larger public, for example to what extent Al Jadeed in fact did or did not reveal the identity of (purported) protected witnesses, a matter that has been left unclear in the Prosecution’s submissions so far (or at least in the submissions that have been made available to the public), but which is probably one of the key issues in this case. This is very unfortunate, especially since this case has drawn so much attention and public debate within Lebanese society.

Karim Khan, QC, counsel for Ms. Al Khayat and Al Jadeed TV, cross-examined this witness the subsequent day, 17 April. During cross-examination, the witness was presented with an article from the German newspaper Der Spiegel published in 2009, which revealed confidential information about the case at the time. The Prosecutor amicus Mr. Kenneth Scott objected to this line of questioning, indicating that it would be irrelevant and that the court ruled previously in decisions on pre-trial motions that the selective prosecution and the fact that other people should have been prosecuted, is not a defence. However, Judge Lettieri ruled that the line of questioning could be relevant to the defence strategy, and dismissed the Prosecution objection. In responding to questions by Mr. Khan, the witness said he was not aware of any action undertaken by the STL in response to this information.

The witness was shown several other newspaper articles that disclosed confidential information. The defence seems to want to prove that the idea behind initiating this case was to silence the press in Lebanon, and more specifically Al Khayat and her media corporation Al Jadeed. That the Prosecution could have initiated contempt cases in similar cases, but decided not to. An interesting strategy, and it remains to be seen whether the information contained in the various instances was indeed of a similar nature, in which case the defence may have a point, or whether the information disclosed in this particular case was of a different nature, and thus indeed warranted prosecution.

The witness agreed to a statement by defence counsel that no names were in fact given in the broadcast, and that the faces of the witnesses were pixelated to some degree. The witness vaguely remembered another broadcast by Al Jadeed, of beginning of 2011, containing interviews between Mr. Saad Hariri and a Prosecution investigator. Counsel stated that Al Jadeed had identified its interest in reporting on the Tribunal back then. The witness did not recall whether the Prosecution threatened Al Jadeed with prosecution at that time. The following part was in private session.

Ms. Bernard is currently Field Safety Adviser for UNHCR in the Congo; prior to that, she was Head of Field Security at the STL in the Beirut Office, between approximately February 2012 and May 2013. Ms. Bernard was asked by Mr. Lodge, who will be called as a witness in this trial on 20 April, to give several documents to a television station; the witness could not recall the name of the station. She was requested to personally deliver four envelopes to a manager in the TV station. According to Ms. Bernard, these letters had a connection with the disclosure of certain witness names to the TV station. The witness handed the four envelopes to Mr. Dsouki, a manager at the TV station.

The witness knew vaguely about the content of the envelopes, about which Mr. Lodge had briefed her. It contained information for the TV station that it could not disclose or broadcast. In August 2012, Mr. Lodge called the witness again that she had to deliver another three letters to deliver to the TV station, which she did. She was told to do things 'low key' and not make an official appointment, first because it was late at night, and secondly because it was a rather sensitive area.

This witness was cross-examined by co-counsel for the defence, Mr. Rodney Dixon. The witness explained that she was merely a postman, only doing what she was told to do by Mr. Lodge. Mr. Dixon tried to discredit this witness's evidence by questioning the manner in which she delivered the envelopes and to whom she did that.

The third witness called by the amicus Prosecutor was Mr. Akram Rahal, a Chief Warrant Officer with the Judicial Police Service in Lebanon. On 14 August 2012 he was assigned by the head of the section to a mission upon the request of the Prosecutor General to serve Ms. Mariam El-Bassam with several documents. Ms. El-Bassam is the head of the news section of Al Jadeed TV. After receiving this assignment, the witness called Ms. El-Bassam for an appointment to deliver these documents. Mr. Rahal delivered several documents to Ms. El-Basam in the Al Jadeed building, together with his colleague Mr. Ziad Eid, a chief warrant officer. After delivery of those documents, they signed a receipt, showing that they served her the papers, and she signed the receipt.

This witness was also cross-examined by defence counsel Mr. Dixon, who questioned Mr. Rahal about the receipt and whether a copy thereof was provided to Ms. El-Bassam, which was not the case.

On 20th April, Mr. Lodge testified in the contempt case. Mr. Lodge has been Head of the STL Beirut Office since June 2010, and the testimony evolved mainly around an Order of the then-Pre Trial Judge Daniel Fransen of 10 August 2012. That Order directed Al Jadeed TV, its employees, agents and affiliates not to disseminate any confidential information relating to the Tribunal and its purported witnesses. Al Jadeed began broadcasting televised reports on 6 August 2012, and in spite of a notice (Notice of Cease and Desist for Al Jadeed TV) sent electronically by the Registrar to Al Jadeed on 7 August 2012, Al Jadeed continued its broadcasts on 7, 8 and 9 August. Whilst the faces of the witnesses were slightly obscured, the Prosecution is of the opinion that the faces of the witnesses remained recognisable. The Notice was sent electronically, but also an attempt was made to hand deliver by a senior security officer of the STL Beirut office to Mr. Ibrahim Dsouki of Al Jadeed TV; however, he failed to do so. On 10 August 2012, the Order by the Pre-Trial Judge was delivered to Al Jadeed, both physically and electronically to Ms Khayat, who was in France at the time. The witness never received confirmation of receipt of his email. The physical delivery the subsequent day, 11 August, was not successful either. On 14 August, the documents were served on Al Jadeed by the Lebanese authorities. In response to questions from the defence of Ms Khayat, the witness had to confirm that there is no document that proves that the Order was served on Ms Khayat on 10 August 2012. The remainder of this witness's testimony was held in private session.

Other witnesses testified in private session

Various other witnesses testified in private session, including witnesses AP11, AP12 and AP13.

The last witness to testify on behalf of the Prosecution was expert witness Dr. De Brouwer, Associate Professor of Criminal Law at Tilburg University, and research fellow with the International Victimology Institute Tilburg. 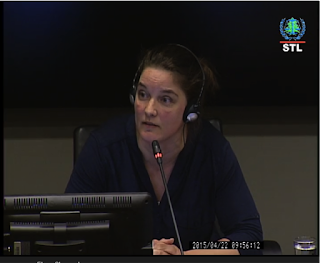 In her report, she mentioned two effects on witnesses: first, the safety of the witnesses, and second, the effects that disclosure has on the administration of justice. Besides clear safety issues such as threats, intimidation and even killings, disclosure of identifying information can also lead to stigmatisation, and psychological and socioeconomic harm. Disclosing this kind of information has a significant risk for the lives of the witnesses and can result in interference with the administration of justice, Dr. De Brouwer testified.

Counsel Karim Khan for the defence attempted to, aggressively but successfully, discredit the witness's impartiality and expertise in her reporting on this specific case. The fact that this expert witness had never been to Lebanon, nor studied the situation of Lebanon, was not deemed relevant in her own opinion, but defence counsel asked her detailed questions about this. Counsel Khan supported the defence theory by making this expert confirm that witnesses giving evidence in public has never discredited any international tribunal, hence, disclosing the identities of any purported witnesses would not have discredited the Tribunal's reputation in this case either. The expert witness was asked questions by the greater expert, Karim Khan, a defence counsel with extensive experience before most international tribunals. In her report, Dr. De Brouwer alleged that several ICTY cases and the Muthaura case before the ICC had not led to convictions due to witness interference, which statement she could not maintain under Khan's rigorous questioning.

The Prosecutor Kenneth Scott attempted repeatedly to object to Mr. Khan's questioning of the witness, mostly relying on the  irrelevance of the line of questioning, but was unsuccessful in his objections. Mr. Khan managed to portray this witness as biased towards the prosecution case. Perhaps it was not so much the witness who was to blame for the content of her report and how that lacked importance for the prosecution case, but more so the prosecution itself, who chose to bring this report into evidence, thereby creating an opportunity for the defence to fiercely attack it. As indeed stated by counsel for the defence during his cros-examination, the topic of the report should not have been dealt with by an expert witness. This was indeed evidenced by the fact that defence counsel had much greater knowledge of the topic than the expert herself.


Conclusion of the Prosecution case

With Dr. De Brouwer, the Prosecution case came to an end. It is very difficult for outside monitors to assess the credibility of the Prosecution's allegations, given that so much of the core evidence in this case remains confidential. This is very unfortunate, because the debate about this issue in Lebanon is very heated and evolves around the basic human right of freedom of expression. It is crucial that, whatever the outcome of this case, the public has access to the relevant information in this case. The current debate has the potential of undermining the STL's credibility within Lebanon, and if the public does not have access to the relevant documents and information, especially if the Court would come to a guilty verdict, the journalistic community within Lebanon may not be able to understand this decision, therewith undermining the Court's credibility, an unwanted development for the STL.

The defence case will follow, and hopefully will reveal more information about the content of the case and the specific allegations against Ms Khayat and Al Jadeed TV.
Posted by Unknown at 4:20 PM