El-Sabeh testifies at the STL

Witness El Sabeh appeared in court between 16 and 19 March 2015, testifying on the role Syria played in Lebanese internal affairs and ultimately in the 14 February 2005 attack that killed former President Rafik Hariri. Again, this witness was a longtime friend and confidant and political ally of the late Prime Minister. 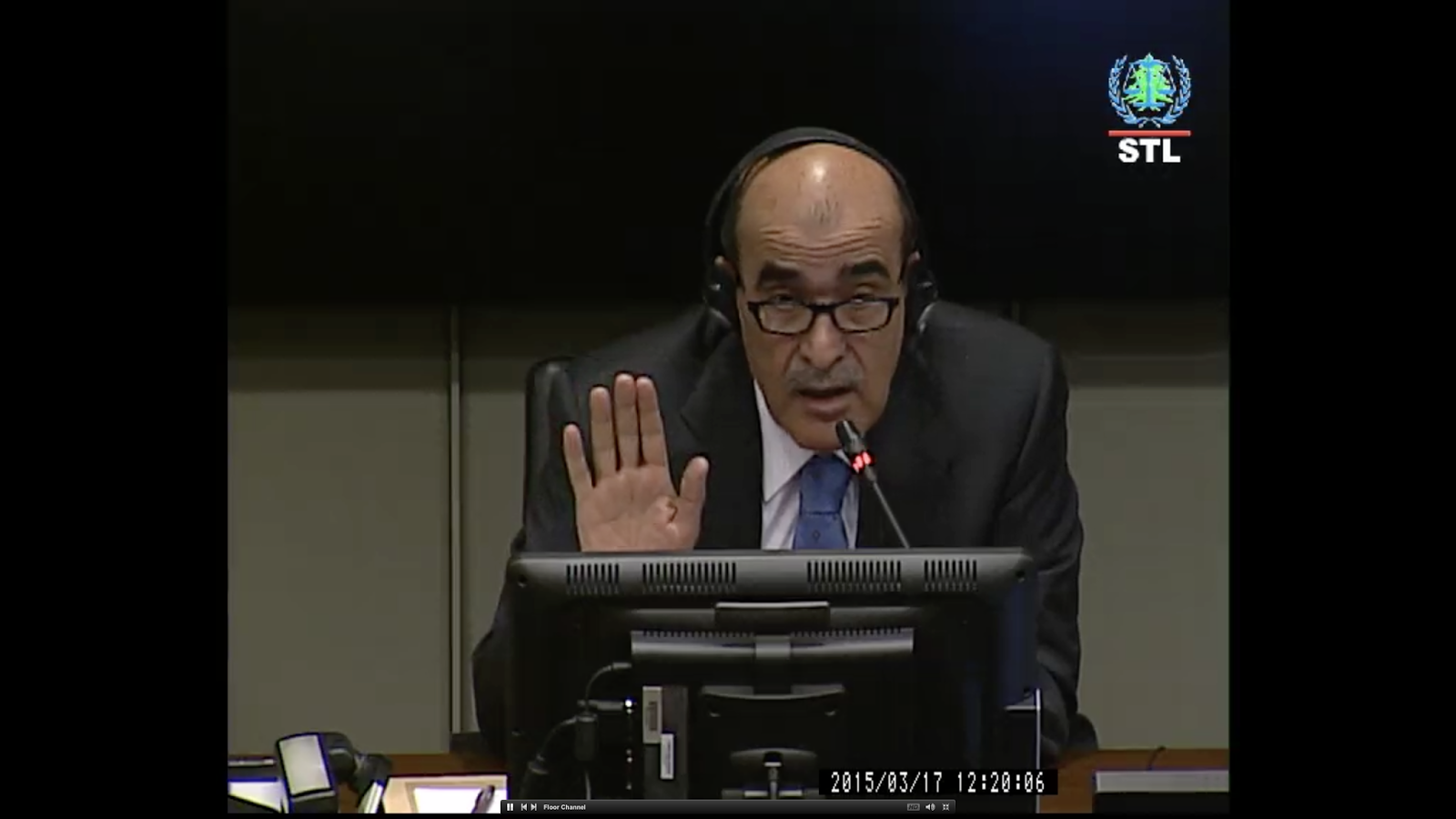 [Screenshot of witness El-Sabeh in court.]

The Prosecution started examining this witness about the relationship between Hariri and the Syrian regime, Syrian interference in Lebanese politics, and its evolvement throughout the years. The witness testified about three meetings between Rafik Hariri and Syrian officials, that took place between 1999 and 2004. In 1999, Hariri for the first time met with Bashar al Assad at the request of Syrian President Hafaz al Assad. The witness accompanied Hariri on his trip to Damascus, though he did not attend the actual meeting. After the meeting, Hariri told El-Sabeh, referring to Bashar al Assad, "God help Syria, Syria will be ruled by a child".

In December of 2003, another meeting was held in Damascus, this time with Bashar al Assad in power. The witness did not accompany Mr. Hariri on this trip, but the latter briefed the witness about the meeting the same day. The meeting had been with President Assad, Brigadier-General Ghazi Kanaan, Rustom Ghazaleh and Brigadier-General Mohammad Khallouf. Whilst President Assad was quiet during most of the meeting, the other three men all threw accusations against Hariri. He said afterwards that


"I thought for a second that I should stand up and leave because of the harsh words I heard from them, words given by officers to a prime minister, subordinates saying those words, and I felt personally insulted and I felt my country was insulted."

According to this witness, Hariri was also informed to do something about the media and their reporting on the role of Syria in Lebanon.

The third, and last, meeting was held in late August 2004, and later that day, Hariri met with the witness and others. Hariri informed them that the meeting had not gone well. The topic was the extension of President Emile Lahoud's term, and the Syrian officials had asked Hariri to submit the extension to Parliament. The witness says that Hariri interpreted the words of Bashar al Assad as an order, not as a question.

Whilst the Syrian officials requested Hariri to support Lahoud's extension on the one hand, on the other hand Hariri became part of the Bristol Group, which was considered to constitute a form of national reconciliation; a project aiming to reject the Syrian presence in Lebanon. This Bristol Group was the founding force of a new political movement in Lebanon. The new political opposition in Lebanon was founded by its creation, and preparing for the 2005 parliamentary elections. 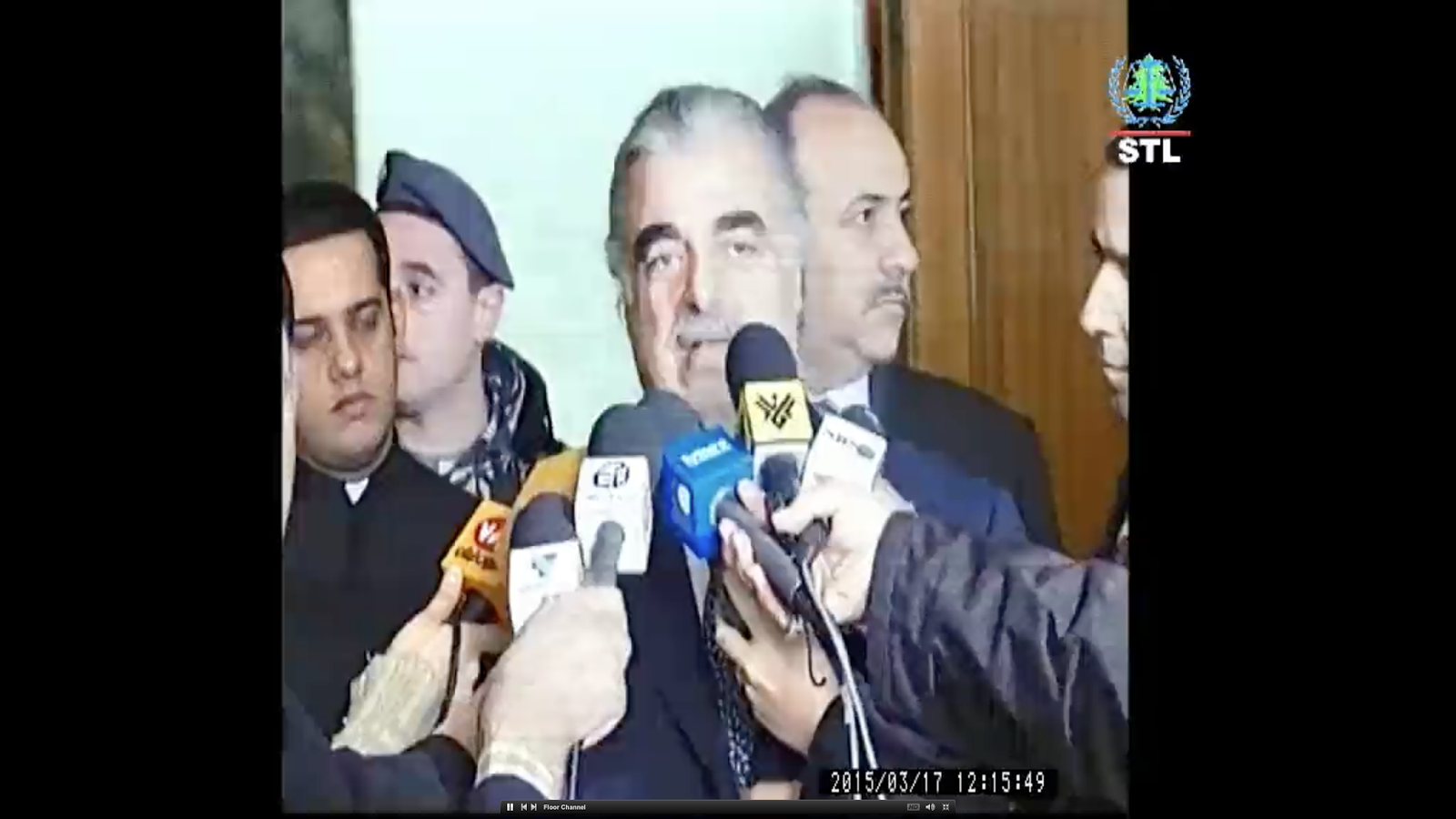 [Screenshot of video clip played in court during El-Sabeh's testimony.
The still shows Rafik Hariri in front of microphones.]

The witness testifies about Hariri's position immediately preceding his assassination, and that he was ready to join the opposition unequivocally. That was a process that had been going on for months already. He was starting to build up political alliances for the upcoming parliamentary elections.

Judge Lettieri asked the witness about the role of Hezbollah. Possibly important for the defence, the witness responded that Hezbollah was then not at the forefront of the political confrontation; it was in dialogue with Hariri. He states:


"I can say with a tranquil mind that I didn't live and I didn't witness a political confrontation between Hezbollah and Rafik Hariri in 2005. I say that with a clear conscience."

The Syrian authorities issued a campaign targeting Hariri, already in 1998, to oust him from the government, by violating article 53 of the Constitution.

The witness is further asked about the organisation Al-Ahbash in Lebanon, they are referred to as the Association of Islamic Philanthropic projects, a religious association that you will find in mosques and that will appear in rallies. The witness believes they are Sunnis, but he does not have a lot of knowledge about the topic presented to him by the defence.