Contempt case at the Lebanon Tribunal: The defence case

The Amicus Prosecutor finished the presentation of its case end of April 2015 (see our blog post). Between 12 and 14 May, the defence for Ms. Karma Al Khayat and Al Jadeed S.A.L. presented its case to the Court.

On 12 May, the defence called its first witness, Ms. Rana Al Sabbagh; she is the executive director of Arab Reporters for Investigative Journalism, which organisation promotes the culture of media excellence and accountability journalism in nine Arab countries, including Lebanon. The organisation teaches journalists how to investigate a story and how to identify open and closed sources.

This witness followed the work of Al Jadeed, mainly about corruption they were reporting on. Around August 2010, the witness contacted Ms. Khayat and asked her if she could come and share her experience with them. Whilst Ms. Khayat had other commitments, Mr. Dsouki and Mr. Dimitri attended the training instead of the accused on behalf of Al Jadeed. In 2011, the witness invited Ms. Khayat again, as well as three other journalists, to attend their annual journalism training.

The witness explained the details of the training, including what journalists are allowed to do and what is not legal. They also train journalists on legal and ethical issues. In responding to questions by counsel for the defence, the witness said that working undercover and employing hidden cameras is not the rule, but that it can be justified in exceptional circumstances as a way of showing to the public that criminal acts are being conducted. In such situations, the faces of the culprits should be blurred.

The Amicus Prosecutor then cross-examined this witness, first asking her about the relationship between the witness and the accused. The witness responded that the last time they met was before Christmas of last year, in professional circumstances; she added that the two are not friends and are not socially connected. Ms. Sabbagh indicated that there are three basic rules that apply to investigative journalism: 1. You never lie; 2. You never tell the whole truth, and 3. You don't have to say why you are here. Additionally, when there are extremely important public objectives at stake, it may be justified to violate the law. It is the duty of journalists to expose miscarriages of justice and injustices, not because they want to cause a scandal, but to protect society.

The subsequent day, 13 May, saw Mr. Mahfouz testify on behalf of the defendant. Since 2003 Mr. Mahfouz has ben the President of Lebanon's National Audiovisual Media Council (NAMC). The NAMC is qualified to certify and authorise the establishment of audiovisual media outlets. The NAMC has no preventive control, only after publication or broadcast can it determine whether the behaviour of a media outlet violated any applicable media legislation. They have a gradual scale of possible sanctions they can apply: warning letters, stopping the program or television station for three days, withdrawal of the license. The NAMC is not (yet) entitled to impose a financial sanction. 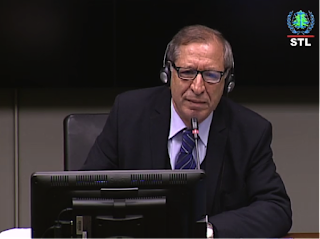 After the assassination that is subject to the main investigation in the Ayyash et al. case at this Tribunal, the STL contacted the NAMC with a request to hand over all relevant information surrounding this event. NAMC contacted all audiovisual media houses to send this footage directly to the Prosecutor's office of the STL. The witness noted that all the media houses, including Al Jadeed TV, responded positively to this request. The defence noted during its examination that quite a lot of footage that the Prosecution uses in the main case derives from Al Jadeed TV. Whilst not explicitly said in court, the defence wanted to make clear to the Court that Al Jadeed has been cooperative to the STL, thus attacking the Prosecution theory that the defendants wanted to undermine the integrity of the Tribunal.

In relation to the request to Al Jadeed to stop broadcasting the interview they had conducted with confidential witnesses, the NAMC received a letter from Prime Minister Tammam Salam to take all necessary measures against Al Jadeed. On 8 August 2012, a meeting was arranged between the witness and representatives of Al Jadeed, namely the Director of TV News Ms. Mariam Al-Nassam and Al Jadeed's lawyer Ms. Maya Habli. The meeting was conducted at the witness's office in the NAMC building. After the meeting, the witness sent a letter to Prime Minister Tammam Salam, stating that he "did not find that Al-Jadeed violated any provision of media laws and that the broadcast wasn't in violation with the principles of the NAMC". He further tells the Court that the NAMC did not receive any complaints from the public or specific witnesses about the broadcast. He moreover added that "Al-Jadeed had no criminal intent when they were doing their work".

During an extended cross-examination, Amicus Prosecutor Kenneth Scott was repeatedly accused by defence counsel and the witness of manipulating the latter's statements, whilst Mr. Scott became increasingly frustrated by the witness's digressive answers to his questions. The witness did not himself watch the broadcasts, and he did not verify his opinion about the broadcasts with anyone. He did not have information that some of the witnesses were interviewed under false pretences. If he had had that sort of information, he states, he probably would have handled the situation differently and would have had to intervene. He is still of the opinion that those behind the broadcast did not have criminal intent, but they had the intention to discover false witnesses.

Mr. Charbel Antoine Bou Samra appeared in court in the afternoon of 13 May 2015, to provide a short testimony about a meeting he had held with Ms. Mariam El-Bassam, the Head of TV News at Al-Jadeed and her lawyer, Ms. Maya Habli, both mentioned in the previous witness's testimony.

In response to questions by counsel Rodney Dixon for the defence, Mr. Bou Samra testified about an alleged forgery complaint filed by Ms. Marian El-Bassam before the Court of Cassation against an unknown person. That file had been referred by the public prosecutor to the witness on 8 October 2013. The witness found out that the alleged forgery concerned documents of the STL. The witness asked Mr. Ziad Eid and Mr. Akram Rahal, two officers in charge of servicing STL documents, to come to his office. He asked them whether Ms. El-Bassam had signed the report in their presence, which they indeed confirmed. During a later meeting, Ms. El-Bassam said that she was told that she was claiming that there was a forged signature on a report served on behalf of the STL, pertaining to a crime of contempt of court, but that she herself did not have a copy that document. She said during that meeting that she had never perpetrated any act of contempt against the STL and that there was no justification for any order to be served on her. During this meeting, Mr. Bou Samra showed her the document in question, and she immediately recognised her own signature. She apologised and asked to withdraw the lawsuit. She was confused about the issue.

On 14th May, the defence requested the Court to show a five minute video already forming part of the Prosecution evidence, dealing with the 10 August Order by the Contempt Judge. The video shows an interview with Ms. Khayat along with Al-Jadeed's legal counsel Ms. Maya Habli. Counsel Karim Khan for the defence alleged that this video shows when Ms. Khayat and Ms. Habli for the first time were confronted with the Contempt Judge's Order to stop the broadcast, and defence counsel argued it show that their confusion is not contrived, not feigned.

Mr. Afif Chouaib: Head of the Lebanese Inspection and Investigation Bureau at the Directorate General of the Civil Defence 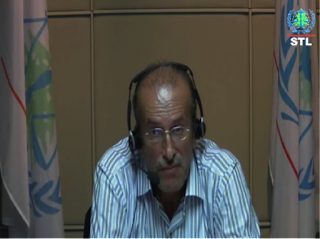 This witness testified through video link from the STL Beirut Office. Since August 2011, this witness has been the Head of the Inspection and Investigation Bureau at the Directorate General of the Civil Defence. The third counsel for the defence, Ms. Shyamala Alagendra, examined this witness in chief. This witness was summoned by STL investigators to give evidence, and this evidence was leaked at some point. The witness tells that the Directorate General knew the summons before he himself had any knowledge of them. The witness's complaints about confidentiality issues at the STL predates the Al-Jadeed broadcasts.

In 2012 the witness was in his office when Mr. Firas Hatoum and another person entered his office. They carried a camera on their shoulder, but the witness informed them that he could not allow them to record an interview, because the law did not entitle him to do so without prior authorisation from the civil defence or his boss. Mr. Hatoum then told the witness that he only needed two minutes of his time, and the witness told them they could enter, but without the camera. Later on he found out they had been carrying a hidden camera. The men informed the witness that they had information that the witness had been contacted by the Tribunal. After the interview had been broadcast, the witness was approached by people from the STL. The witness blames the STL for having leaked information. When summoned, the witness was told no one would ever know of the meetings between him and the STL staff, but this turned out not to be true. The witness endured mainly psychological and emotional consequences. Many people in Lebanon viewed him as a false witness for the STL.

In cross-examination, counsel Mr. Slobodan Zecevic for the Prosecution, attempted to bring out that it was more the Lebanese press that were responsible for the (alleged) leaks that had occurred, but this witness disagreed and maintained that the Tribunal was to be blamed for this, adding: "I repeat and I repeat - and I will repeat tomorrow and every day, the fault and the blame falls on those who leaked the information from inside the Tribunal, nothing more than that".

This witness was the last witness called by the defence, and thus brought an end to the defence case. The defence has done a proper job in arguing that there had been no criminal intent on the defendants' mind when broadcasting the interviews, though it will be interesting to hear the parties' final arguments and read their final briefs to see how they will interpret the evidence provided in court. Unfortunately, much of the evidence in the prosecution's case was withheld from the public, and we, as well as the wider public, will thus not be in a position to scrutinise this part of the trial.

Contempt Judge Lettieri instructed the parties to file their final briefs by 8 June; closing arguments will take place on 18 and 19 June.
Posted by Unknown at 3:42 PM